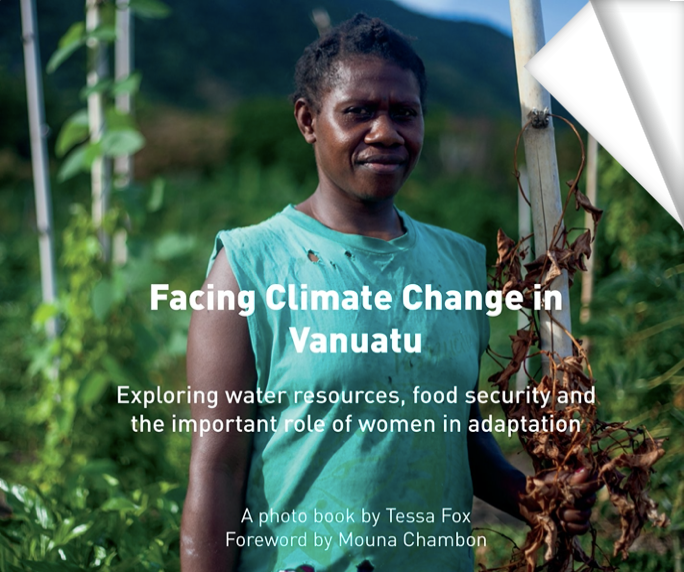 Facing Climate Change in Vanuatu is a photo book highlighting the affects of climate change in the South Pacific. The photos featured are taken while visiting three main islands of the Vanuatu archipelago; Nguna, Espiritu Santo and Tanna. Each island is faced with a different situation, whether it is water scarcity, food shortage, or an increase in natural disasters. These varying scenarios all impact negatively on the everyday life of the islanders. The women of Vanuatu are impacted the most due to their custom obligation of gathering food & water for the family as well as their denied role in determining adaptation strategies.

This photo book illustrates these issues through visual story telling and aims to increase awareness that climate change is real and now. It is hoped that through the publishing of this book people in more developed nations may see in a more tangible way the impact of mass consumption and disregard for the environment and atmosphere. Also, with increased awareness more NGOs also see the viability in helping affected regions.

The release of the photo book was accompanied by a solo exhibition at la Recylerie, Paris in June 2017.

Buy the book here and click here to preview.

Lewie holds onto the dead leaves and stem of a yam vine. Yam is among the traditional food of Vanuatu, typically eaten everyday in every meal. Wusi has been unable to harvest yam this year due to longfella drae taem (an extended dry time). Wusi, Espiritu Santo.

Irrigated water from a nearby creek runs into this tank for the village to drink and wash. Wusi, Espiritu Santo.

The water resources of Middle Bush come from rain tanks, when there is rain, though is supplemented by a nearby creek; particularly for washing. Middle Bush, Tanna Island.

Mother of six, Flora digs in her garden for Taro ahead of that night's dinner. The women of Vanuatu are extremely hardworking women. Preparation of family meals almost commences immediately after consuming the previous one. Middle Bush, Tanna Island.

After collecting root vegetables from her garden, Flora walks to her nearby community for a day of making the traditional dish, Lap Lap. Food preparation and cooking is primarily the role of women in Vanuatu. Middle Bush, Tanna Island.